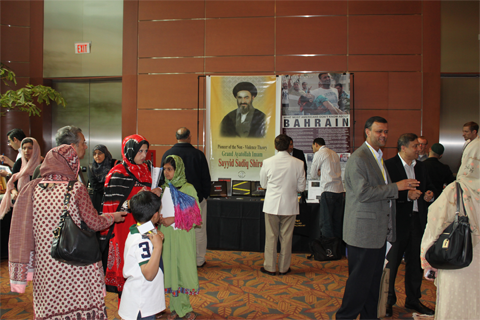 A Focus on Identity, Citizenship and Collaboration

Toronto, Canada, hosted thousands of Shiites who gathered for the Ninth reunion to take part in an intellectual convention called Universal Muslim Association of America. Throughout the long Memorial Day weekend, UMAA conference was an incredible reason for scholars, researchers, professors and experts to gather and discuss Islam and the coexistence of Quran, Ahlul Bayt (the prophet of Islam and his 12 successors) and the modern society. Among many other great topics that were addressed, the Prophet of Islam, Ahlul Bayt in the Eyes of Non-Muslims, Islamic Communities and Racism: A historical & Contemporary Perspective, Our Global Identity in the 21st century, and the State of Shia: Session on the Crisis in Bahrain were emphasized on as well.

The representatives of Imam Shirazi World Foundation held an informative booth and addressed any questions that people had in mind about the ISWF’s activities and the most recent events in regards to Bahrain, and other agendas that ISWF has. Our staff also met with people of different ethnicities and religions to take their inputs and opinion regarding many programs and events that ISWF addresses.

Imam Shirazi World Foundation took part in an event held in Jaffari Village, one of the largest mosques in the Northern America, regarding The state of the Shia : Special Session on the Crisis in Bahrain. The critical and heart breaking crisis that is ongoing in Bahrain has brought together many scholars and experts, accompanied by the presence of Media and press, to discuss and document the crime that has been committed in Bahrain. Attendance of such great scholars, experts and the importance of the crisis that has been going on for months concluded to presence of multiple press and media channels, and more than dozen of Humanitarian organizations such as Shia Rights Watch, and Imam shirazi World Foundation and Americans for Democracy and Human Rights in Bahrain.

In Dept Analysis of the heart breaking crisis in Bahrain