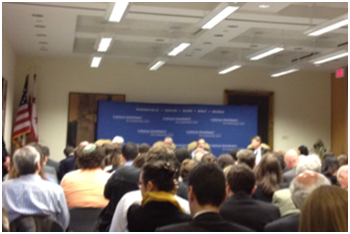 Less than one year after the formal split between Sudan and South Sudan, the two countries are wrapped in conflict again over border demarcation, oil, and other issues. Both nations are also contending with serious internal turmoil in the form of tribal conflict, weak institutions, and mounting popular dissatisfaction. Imam Shirazi World Foundation sends a team of experts to attend the event “Sudan in Conflict,” hosted by the Carnegie Endowment for International Peace where Ambassador Princeton Lyman, the U.S. special envoy for Sudan, joined by Ambassador Alan Goulty of the Woodrow Wilson Center and Carnegie’s Marina Ottaway to discuss the issues at stake in the conflict between and within Sudan and South Sudan and the role of the international community.