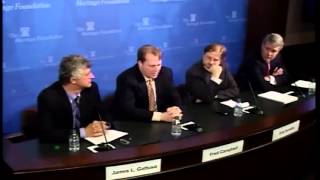 ژIn the Heritage’s most recent event: “Unleashing Free-Market TV,” our staff attended an important event about  the television industry undergoing massive change. With consumers increasingly replacing or complementing over-the-air television and pay-TV subscriptions with other video platforms. These changes, combined with the Supreme Court’s recent ruling in Aereo, have sparked a broad debate about government regulation of the video marketplace in the 21st Century. Many believe the regulatory framework has simply not kept pace.